Climactic Entertainment has performed at all of the best wedding venues in Wilmington and beyond. We travel all across North Carolina and even a ways into Virginia and South Carolina. Over the years we have seen some amazing decorations and even some wedding venues you would never guess were actually wedding venues. So in this blog entry, we want to show you some of the most unique and interesting wedding venues across the state we have entertained.

This beauty was built in 1905-1906 by Elizabeth Haywood Bridgers, widow of Preston L. Bridgers, local merchant and son of Robert Rufus Bridgers, past president of the Atlantic Coast Line Railway, founder of the Wilmington/Weldon Railroad, and two time representative to the Confederate Congress. Formerly named "The Bridgers Mansion" after it builder, the new owners after extensive renovations has been renamed the Graystone Inn.

This marvel is another historic landmark where you can actually fill the history. This year marks the 251st anniversary of St. Philip’s. The church was dedicated as part of the Church of England on May 24, 1768.The brick structure, with thick walls 24 feet high, had only a short career. It was burned by British soldiers in 1776 and never restored. Even today you can still see the impressions of the musket ball rounds that pelted the church during the battles of the Revolutionary war.

For over 100 years Maola used this facility to make some of the best ice cream and milk in the state. There is a tremendous amount of history in New Bern. In fact, most people do not even know that this was the original state capitol of North Carolina. After Maola stopped production a few years ago, it was purchased by developer Mike Hawkins who used to purchase ice cream here as a kid and wanted to save his childhood nostalgic memory for others. It has been renovated and converted to a convention center in Downtown New Bern and with a riverfront views and historic charm, this is an amazing venue for weddings.

For those on the artsy side or those with very eclectic taste, you seriously want to consider Walkerworld. Nestled away in the woods, with a beautiful riverfront view, this 11 building retreat has more to offer than meets the eye. Even from the first moment you pull into that long driveway, you are met with metal sculptures, vintage store signage and beautifully decorated trees. Then everything opens up to massive complex with different worlds in every structure. Classic treasures from multiple time periods mixed with fresh new art inspired by the history saved in this masterpiece of a wedding venue.

Now if you want a wedding venue that literally has it all, there is no better place than the Watson House. This beautiful twenty year old estate is nestled on seven acres of picturesque, coastal waterfront and features lavish gardens throughout the property, making it a truly one-of-a-kind place to say “I Do”. This waterfront venue in NC features abundant gardens, rustic fountains, horses in pasture, and panoramic coastal views of the Bogue sound that will surround you and your guests as you live out your wedding day dream.

What does "All Inclusive Weddings" mean? 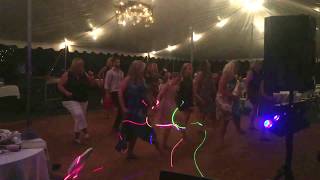 I love Our New Spiderlights!

5 Tips for a Seamless Wedding Reception!

What is A Gobo or Monogram Light?

Beach Weddings with no Mess!

What does "All Inclusive Weddings" mean?

I love Our New Spiderlights!

5 Tips for a Seamless Wedding Reception!

How to Plan for an Outdoor Wedding!